by Holiday Ghosts on FatCat Records 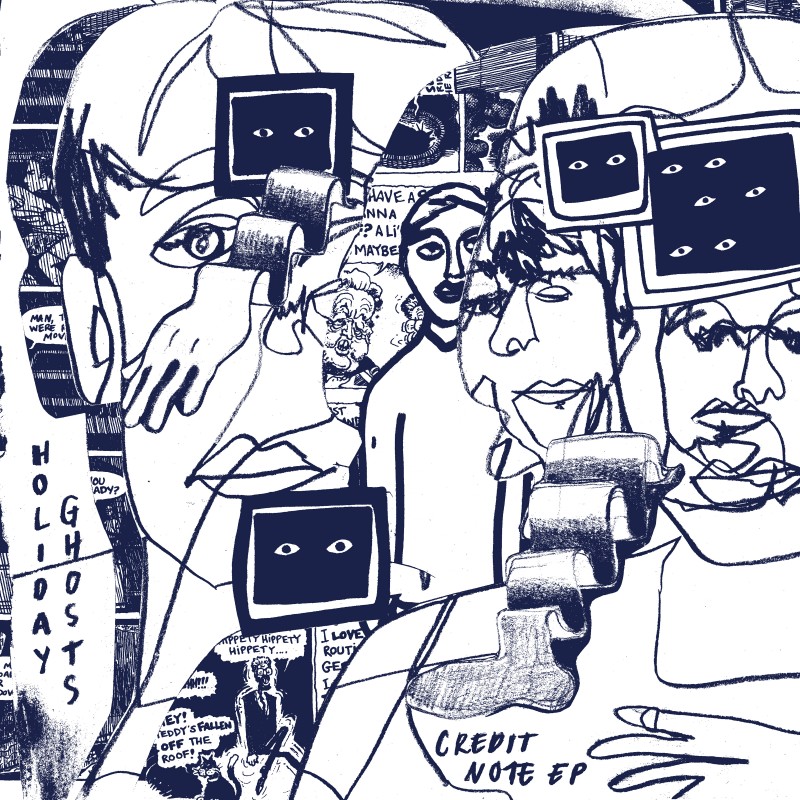 Holiday Ghosts, from the south coast of UK, is the ongoing musical collaboration between partners Katja Rackin and Samuel Stacpoole, now joined by B. Spanks and Morgan Lloyd-Mathews. Call it garagy, jangly, rock n rolly, indie, punky, poppy, whatever you wanty. They frame their own takes on the human experience with a sound that is as lean, under-processed and straight to the point. Yeah the 1 drum beat Katja learned at the start remains ever present but it never fails to feel new. Kind of like how sex rejuvenates itself each time.

Their new EP Credit Note was recorded and engineered by Phil Booth of JT Soar studio, in North Wales in early January 2022. “We decided to make an EP that is really true to our current live playing style. On our albums we always favour a range of styles, tempos and instruments to give a varied record. We realised though, that we often find ourselves playing pretty hard and fast at gigs chasing more punky, and rock n roll sounds. So if you want to hear a condensed record of us doing just that, that’s what the Credit Note EP does.” Kat

The 6 tracks on Credit Note EP are a full collaboration with all four band members for all stages of the writing and recording process. Since their 3rd LP North Street Air, released by FatCat Records in 2021, founding members Katja Rackin and Sam Stacpoole have found a new dream team. Again from the endless well of ex Falmouth / Troubadour Studio musicians. B. Spanks is on 2nd guitar and vocals and Morgan Lloyd-Mathews on longhorn bass.

Whilst the lyrics and vocals of Plain Dumb come from Katja and Sam, Morgan contributed the whole chord sequence and structure, pushing the tempo to the fastest and hardest Holiday Ghosts song to date. Bright Lights Big City is a song fully imagined by B.Spanks who takes lead vocals and production duties. The method behind writing this song was to not practice at all between the start of the idea and a year and a half later when it was recorded to allow room for improvisation.

Continuing the lyrical themes of social commentary that were present in 2021s North Street Air LP, Katja’s lyrics on Credit Note talk of how our current political system continuously fails to provide adequate social change and how any attempt to do so just feeds into that same system; like a credit note that can only be spent in the same shop. ‘Credit notes no change” This theme can be heard echoed in the rest of the EP particularly on Sardines ( a vinyl only bonus track) “jagged benches and armrests where you sleep, hostile architecture trying to keep you on your feet”
This is the 1st time that Holiday Ghosts have ever outsourced an engineer to work with them in the studio. “It was great for me to finally not be wearing both hats of performing and engineering at once. Particularly as the music was recorded live, I was able to focus a lot more on what I was playing on guitar. Phil is a great producer/ engineer, not only for his efficiency but he’s got a real knack for pointing out parts of the songs that might not be gelling or suggesting subtle differences that make the songs a lot stronger” sam

“Living in Brighton, it's pretty hard to get space to record ourselves in the way we would want to, so we decided to change how we do things a bit . Recently we’ve also done a lot of recording with Ben Woods of The Golden Dregs (an ex Holiday Ghosts member) in a studio in Greenwich. Its gone really well, we cut half a new album there and finished up the rest of the record with Phil in Wales in the same session as Credit Note.” Kat