by Semiconductor on FatCat Records 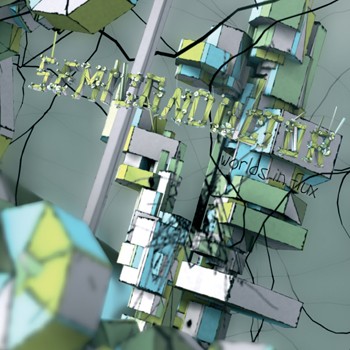 Semiconductor is the alias of Brighton-based duo Ruth Jarman and Joseph Gerhardt, who since 1999 have been making stunning, cutting-edge digital artworks in the form of sound-films, music videos and live animation. Guided by their obsessive interests in landscape, architecture, geology, geography, chaos / systems theory and artificial intelligence, they explore many varied processes of digital animation and the potential of the computer to unite sound and image. What they reveal in the process is a physical world in flux - cities in motion; shifting landscapes and systems in chaos. Central to these works is the role of sound, which becomes synonymous with the image as it creates, controls and deciphers it. Finely crafted digital work is combined with analogue processes that tailor the randomness and errors within computer systems as a co-conspirator. This DVD offers a comprehensive overview of their work over the past five years, featuring 3 music videos (including those for múm and QT?), 4 live cinema pieces, and 6 short films.

Highly original and immensely creative, Semiconductor approach each project from a fresh angle, always looking to extend themselves and to break new ground. They have exhibited their work in gallery installations, at festivals and in live / club environments. They have been awarded numerous fellowships, prizes and residencies, notably as recent artists in residence at the NASA Space sciences Laboratory, UC Berkeley, California, the results of which can be seen on 2 films here – ‘Do You Think Science’ – which takes the form of filmed interviews with NASA scientists, and ‘Brilliant Noise’ – an incredible film pieced together from actual footage of the sun’s surface. The latter film includes the option to select from a variety of specially commissioned soundtracks from The Twilight Sad, Max Richter, Our Brother The Native, Antenna Farm, Robert Hampson, Gaeaudjiparl, Christian Vogel, Iris Garrelfs, Ensemble, Thomas Dimuzio, Disinformation and Semiconductor themselves.

Around 2000 Semiconductor started to develop their own audiences through a series of events they curated called E.M.I. (Electro Magnetic Interference), where they brought together electronic musicians and visual artists to collaborate on image and sound based projects, creating a unique platform at this time. In 2001 they released a debut Art DVD, ‘Hi-Fi Rise', a compilation of work by themselves and others that comprised one of the first ever independently produced DVD-Videos/ROMs. They then went on to develop a broad range of audiences by working at the intersection of music and art and through opportunities such as a series of Warp records commissions for their ‘Nesh’ club nights in London; Sound Film performances at international festivals (e.g., Avanto Festival Helsinki, Transmediale Berlin, Images Festival Toronto); international gallery installations (e.g., Venice Biennale, Prague Contemporary Arts Festival, and at the ICA in London); and also through music videos for the likes of Aco, DAT Politics, and FatCat artists, múm and QT? Increasingly recognised as vital and cutting edge practitioners, they have most recently been awarded numerous fellowships, awards and residencies.